This map only shows the general area where this business is located.

We have trucks in all of these areas 24/7 so delivery times to suit is not a problem.

What we do
Looking for Rubbish Bin Hire in Auckland? Just Bins has been in operation since 1992 and has the bin for you.

Just Bins is a family run rubbish removal business in Auckland operated by Sam and Alana McCool. Originally started up as a lawn mowing business by Mark Taffe in 1992, overtime the lawns became gardening, then tree work & landscaping, and before long, predominantly rubbish removal.

In 2017, Mark & his wife Megan retired and sold the business. Sam and Alana took over the reigns on May 1st 2017 and in the change of ownership all staff were retained. We still have Phil looking after the office answering the phones and dispatching the work to the drivers; Geoff, Norm, Barry, Matau & Mirko.

Just Bins has a fleet of 6 trucks and can supply bins of all sizes between 2 cubic metres and 12 cubic metres. Just Bins is going very strong and our company policy is to provide a prompt and friendly service!

We can be contacted 24 hours a day 7 days a week. Although in their spare time Sam & Alana are usually running around after their 1 year old son, Toby, so it can be quite noisy in the background!

We have trucks in all of those areas 24/7 so delivery times to suit is not a problem.

Just Bins has not given us their exact location, but they are based in Milford 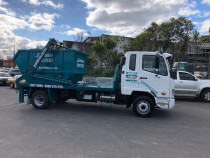 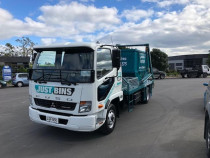 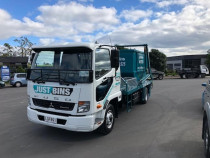 7m3 to be delivered